So, we may have taken the phrase “lost in London” a little too seriously..we didn’t really physically get lost..but we were at a loss for what to do within the first couple of hours of being there. We had booked an AirBnb for the weekend to stay in. There were four of us and we were all going to stay there. Jordan emailed our host over a week ago to get in contact with him and to ask him what the best way to get to his apartment was via public transportation. But the man never responded. She tried everything to get ahold of him. She called, she texted, she emailed, she left a voicemail…nothing. So she tried to contact AirBnb to ask them what we should do, but after being on hold for a total of 1.5 hours, we had to board our plane and so she never got ahold of anybody. We decided we would go to the apartment and hoped that somebody would be there to let us in. We had read reviews on the place and somebody else had had the same issue but the man never let them in. Instead, a neighbor woman let them in. So we were hoping that would be what happened for us also because we had already paid to stay there and now the host was nowhere to be found. We haven’t had any issues with AirBnb prior to this, so the fact that we were now having issues was frustrating.

The boys decided they were going to go and stay in a hostel, afraid that we wouldn’t be able to get in to the apartment. So they did that while Jordan and I went to the apartment to see if we could get inside. Unfortunately, we couldn’t. Frustrated and annoyed, we searched for a hostel to stay at. The one that the boys were staying in was 80£ for 3 nights and we didn’t really want to pay that much for just a place to shower and sleep. We found one for around 12£ per night and we decided that would be fine..but when we tried to call them to see if they even had any free rooms, there was no phone number for us to call.

Jordan called her dad as she was very upset because she felt like this was all her fault, even though it wasn’t at all. Her dad, once hearing the situation, told her to go get a cup of coffee and he would figure it out. So, we went to Burger King for ice cream (because it was almost midnight) and he called back about 10 minutes later to tell us that he booked us a room at the Holiday Inn in Kensington. Now, I know what you are all thinking. “Wow. They didn’t want to pay 80£ for a hostel but they can stay in a hotel in one of the nicest areas of London? Okay.” Jordan’s dad is a member at Holiday Inn and he travels a lot for his job. Which is why he booked us a room there. He and my mom said the same thing of “at least you will be staying in a safe area” and that was so very true. I’m so thankful for Jordan and her dad and the hotel we stayed in! After being “homeless” for about three hours in London, it was nice to have somewhere to stay.

Now on to the adventures:

I have one word that summarizes my whole London experience: English. English everywhere.

You know the saying “you never realize just how much you miss something until it is gone?” That was me with English. Yes, I go to school with other Americans, and yes, we speak in English. But it’s not the same as being surrounded by it everywhere you go. It was crazy how “at home” I felt in London because I was no longer having to work so hard to translate what people were saying to be able to know what was going on around me. Most European countries speak English as a second language, but Spain likes to stay true to it’s Spanish roots and not many people know English. It is growing here, but it’s very hard to find a native to speak to in English and have a full conversation. And even though most of the people in London were British and had that accent and said some phrases differently than would be said in American English, I could understand them perfectly.

However, I think the fact that they spoke English made it not as exciting. I know, I just went on this rave about how amazing being surrounded by English was, but I think it took some of the “unknown” excitement out of being in a foreign country. I mean, what’s the point of going to a foreign country when they speak your language and you can’t even learn a new way to say ‘turtle’? Haha, just kidding. But seriously, there was something missing while I was in London and I think it was the fact that I felt like I wasn’t gaining as much culture while I was there like I had in the other places I’ve visited. And to be honest, I was a little embarrassed because if a stranger would come up to me and ask me a question, I would have a mini-panick attack because that’s what I’ve become accustomed to by being in a country that speaks a foreign language. And then I would remember “oh wait. I speak English.” and then I would answer the question. But I didn’t have to try to translate what they were saying, and that was so strange for me after doing it for the last 2.5 months.

We went to this cute little “tea shop” for breakfast. It was called “The Muffin Man’s Tea Shop” and we had some traditional English breakfasts. From there, we went to the city center where we saw the London Eye, Big Ben, and Westminster Abbey all in one shot. (Which was really nice because most places I’ve been, each big monument/tourist attraction has been located in different places.) We got to watch and hear Big Ben chime at noon. We walked over to Westminster Abbey but did not go in because the line was huge. It’s crazy to think about how I was just there, and I have now been informed of a suspected terrorist attack on the city in this exact area. I am thankful to be back in Spain, safely. 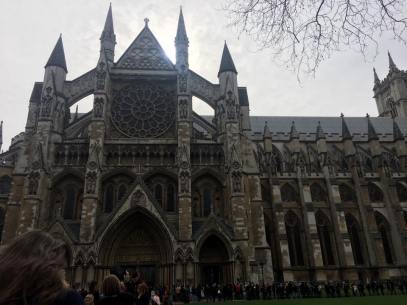 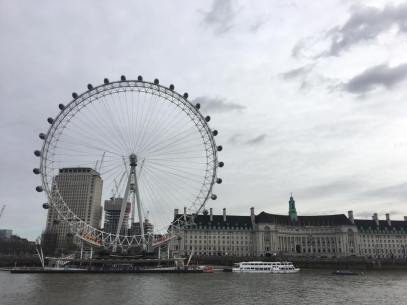 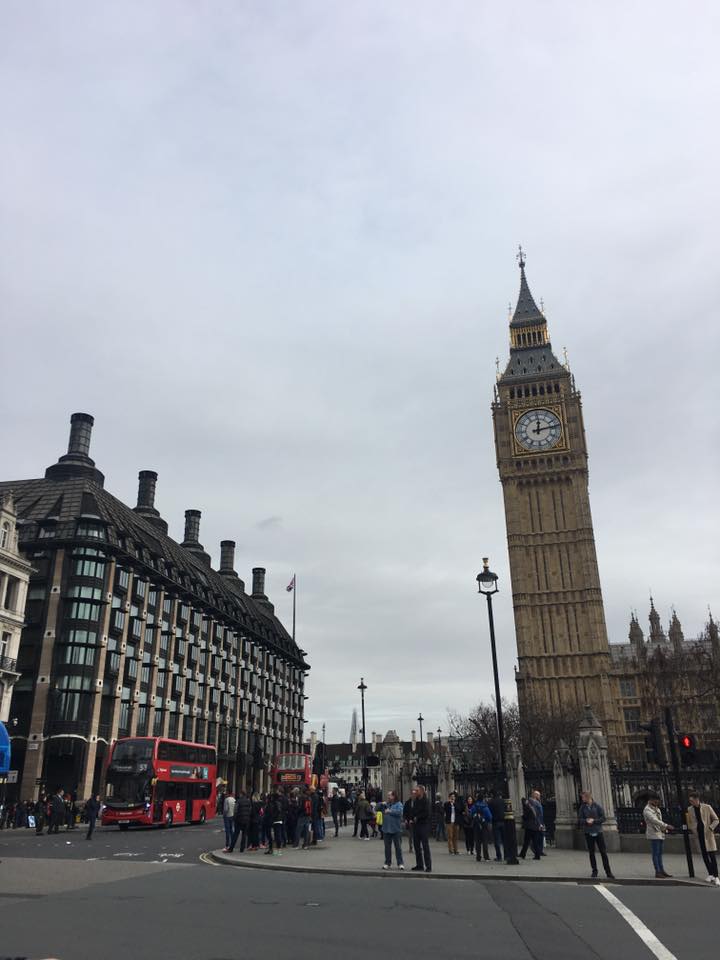 Anyway, after that, we attempted to go find Abbey Road but got lost. The metro didn’t stop at the station we needed because there have been riots going on and different stations were shut down because of them. We tried to find it on Google Maps but it said it would take us 3 hours to walk there so we gave up on the idea.

In the evening, I met up with an old friend that I’ve known all my life, while Jordan went and met up with a friend of her’s that she hadn’t seen since high school. Anyway, Rachel is studying in London and so we decided to meet up and catch up on life as we are both abroad! Plus, it’s always nice to see a familiar face. I met her at the Starbucks near her place because it was kind of difficult to find on your own if you didn’t know where you were going. We went back to her place and had some pizza for dinner before going on a St. Patrick’s Day pub crawl with some of her friends. I had a really great time catching up with her and meeting and getting to know her friends! This is also the first time I tried Guinness and I actually really liked it! The pub crawl wasn’t as fun as we thought it would be, but that’s because there were about 300 other people who were also on this pub crawl with us and it made the pubs very crowded.

On Saturday, we headed for the Tower of London where the Crown Jewels are kept. We walked through some of the tower and stumbled upon a live performance in one of the rooms, which was really neat because it helped us to learn a little bit more about what we were seeing! We made our way to the Crown Jewels, which is what Jordan really wanted to see. Photos were not allowed in there either. One of the quotes that was painted on the wall said, “Authority passes from one monarch to another through the passing of the Crown Jewels during the coronation ceremony.” It was neat to see all of the jewels and the crowns! They were very, very sparkly and quite mesmerizing.

Following the Tower of London, we hit up the Tower Bridge. This is probably the most famous bridge in London and is commonly mistaken as the “London Bridge”. Pedestrians can walk across the bridge, which is what we did, but there is also an option to pay 9£ to walk over the glass floor part of the bridge. We did not choose to do that, but some of my friends that went the week before  us did and it looked pretty neat.

Near the bridge there were also street vendors selling candied peanuts and almonds. They smelled SO good and tasted even better. They tasted like Reese’s Puffs, but almost better. It was crazy how good they were.

(One thing I noticed about London was that there weren’t any other annoying street vendors that harassed you until you caved and bought one of their cheap souvenirs like there were in Paris and Rome. It was actually really nice to not be approached or asked to buy things 24/7 when all you were doing was trying to walk down the street. There weren’t any street performers either.)

After we walked across the bridge, Jordan and I went our separate ways. She had another friend she was meeting up with for lunch and I wanted to do some exploring on my own. So, that’s exactly what I did!

I ventured to Shoreditch, where I found street art galore, amazing coffee, and was completely content with exploring on my own (which is a big accomplishment for me)! I spent a couple hours just wandering around to see what I could find. I stumbled upon a cereal cafe, which specialized in…you guessed it, cereal. It was awesome! I enjoyed a bowl of Reese’s Puffs because after all of the coffee I had been drinking I wasn’t overly hungry..but I couldn’t pass up the opportunity to be able to say that I ate there, so I did. It was really neat and full of tons of things from the 90’s, which brought me back to my childhood. I then ended my adventure by walking through Camden. I stopped in a vintage shop, not really expecting to find anything..but I ended up purchasing a flannel shirt and I am in love with it.

Overall, London was great! It was more expensive than I was expecting.. because the dollar to pound conversion is higher than the dollar to euro conversion. Other than that, it was great! I had chips…but no fish because I don’t do sea food. They were really good! And I really enjoyed taking the Tube. It was fun to me and it was really easy to figure out! Maybe someday I’ll make it back to London to see Buckingham Palace and the changing of the guard.