If before this past weekend you would have ever asked me if I would ever travel to Portugal, the answer would probably be no. It’s not on the “Europe bucketlist” with Paris, London, Amsterdam, Rome, etc. However, if you are thinking about going to Europe any time soon, I HIGHLY RECOMMEND GOING TO LISBON (like…10/10 definitely would recommend).

The country’s capitol has stolen my heart and I wish we could have stayed longer than three days. There is so much to do and so much to see and it’s almost impossible to do all of it in 72 hours, but boy, did we try. 🙂

When we arrived on Friday morning, we didn’t have much of a plan. We thought we could check-in right away to our AirBNB we were staying in, but it turned out we had to wait until after 4 pm because it was being cleaned. So, we decided we were going to visit Sintra, Portugal, a beautiful little city just 30 minutes outside of Lisbon. I had done some research on what todo there before we left Spain and most of the things I thought looked neat were all located relatively close to each other, which was important because we were going to be lugging our backpacks full of stuff around all day with us and we figured it would be better to do that where everything was close together as opposed to in Lisbon where who knew how much walking we would be doing.

Sintra is one of THE most beautiful places I have ever been to in my entire life. Now, I know that sounds cliché, but I’m serious. It was like stepping into a fairytale book filled with a couple of different stories that were waiting for us to read them.

We started the day by visiting the Castle of the Moors. It was built in the 9th century and was built to guard the town of Sintra but was quickly put out of commission after the Christian conquest of Portugal. It was restored in the 19th century by King Ferdinand II, who made it into a romantic ruin and a major feature of the gardens of the Pena Palace (which we went to right after this). The views from the castle and it’s different towers were absolutely breathtaking. It was easy to see over all of Sintra, some of Lisbon, and once the clouds decided to go a way for a while and the sun decided to come out, it was possible to see all the way to the Atlantic Ocean. It was foggy, rained, hailed, and was sunny all within our time at the castle. Everything there was very green since they get a lot of rain because they are located near the ocean.

After the castle, we went to the Palace of Pena. This colorful palace (painted in red, yellow, and purple) was built in 1842 by King Ferdinand II who was all for the arts, literature, and music. It is surrounded by beautiful gardens and enchanted forests. I, personally, enjoyed walking through the forests more than the actual palace. While I love colors with a passion, that was the only really interesting thing I found about the palace. The inside was nothing too special, in my opinion. Other than that, I thoroughly enjoyed wandering through the forests and seeing what we could find. We ended with the Valley of Lakes which also looked like something out of a storybook.

After the Palace of Pena, we were going to go to find an enchanted well at a different location. However, we did not know they closed at 5 pm and we just barely missed it. So, we decided to cure our disappointment with food (as if there is any other way lol). I had been told by a friend to try “queijadas” which are little cheesecakes. When searching them online, I found out that they don’t consist of much – just sugar, cheese, flour, egg, and cinnamon. But oh my, did they taste AMAZING. I am not a big fan of cheesecake, but these weren’t like American cheesecake. The consistency was that of cookie dough (or so Jordan thought) and they tasted like small cinnamon rolls (which I have been craving for about two weeks now). I wish I could take some home for my friends and family to try, but sadly they will not last for another two months. So, I guess that means I’ll just have to eat the package I brought back to Alcalá with me and enjoy them all to myself. Whoops. 🙂 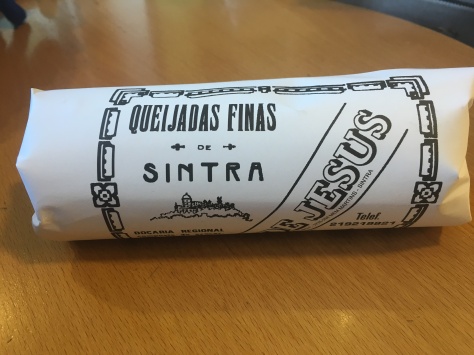 After our snack, we took the train back to Lisbon to check into our AirBNB apartment because we were tired of carrying around or things. We figured out the metro system pretty easily and got to the area our apartment was located. We stopped in a market to buy food to make for dinners and breakfasts so that we could save money by not eating out all the time. In total, we spent 36€ which added up to be 12€/ea. For four meals, that was incredibly cheap. We only ate out twice, lunch on Saturday and Sunday. Both of those meals for me added up to be 20€, so buying groceries was definitely the cost efficient way to go and I will definitely be doing that when I go to Paris, London, and Amsterdam.

So. Let’s talk about my two days in Lisbon. If I can even figure out where to start.

The first adventure we set out on was to find the Arco Triunfal de Rua Agusta (the Lisbon version of the Arc de Triomphe). We bought a day metro/bus pass for 6€ (which was super cheap and amazing because it allowed us to take any metro/bus we wanted for 24 hours which saved us a ton of money). We visited the arch and the plaza near it, which was right along the river (Rio Tajo, which is the river I went ziplining across in Toledo, Spain. It runs all the way through Spain and ends in Portugal! Crazy how small the world is, huh?). We then headed to a café where you dine in an old streetcar.

On our way to the café, we encountered our first experience with pickpocketing. We had to walk up a bunch of steps to get to where the café was located at the top of a hill. Jordan got warm and took off her coat. She put her phone in the outside pocket of her purse and continued on her way. I was lagging a little behind because, well to be honest, I was out of breath. I am so glad I was though. Two men walked up by us and one used a map to try and distract me/cover up my view of the other one trying to steal Jordan’s phone. Luckily, I noticed just before he snatched it and I yelled, causing attention to the situation. The men acted confused and like they didn’t know what was going on, and I yelled at them to knock it off. That was enough to send my adrenaline levels through the roof, but not in the good way. I’m so glad I caught them because I can’t imagine what it would have been like if I wouldn’t had. It was scary, but luckily nothing got stolen.

We finally made it to the café and had lunch there. It was pretty neat to eat in an old streetcar (or tram. They use them a lot in Lisbon. Unfortunately, I ran out of time and did not have a chance to ride on one. I guess that just means I will have to go back someday!). 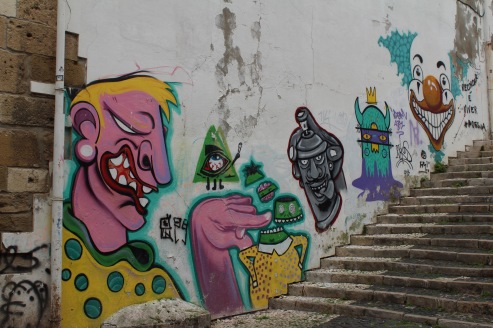 Street art in the stairway up to the top of the hill.

After lunch, my friends and I went our separate ways as we had different things we wanted to do and see. I wanted to go on a street art tour that I had seen on a blogpost I found on Pinterest. So, that’s what I did! The tour was provided by the Destination Hostel which was located in a train station. I ended up being the only person to go on the tour, since the couple that had also signed up did not show up because it was raining (which was fine with me because I got a private, and more personal tour :D). My tour guide worked at the hostel. He was super fun and knew so much about the art he was showing me. We took a van and drove to most of the murals which was nice because 1) it was raining and 2) wayyyy less walking I had to do! A lot of the art he showed me had either a political, social, or economical meaning behind it and each one had a story. And my tour guide knew all of it (yes I know that’s his job, but nonetheless I was still impressed). It was amazing. I learned so much. Street art is legal in certain areas of Lisbon, and most of the best art has been paid for by the city. Of course, I had to ask if there were any turtle murals, and there was and he took me to one! My tour ended up being about 4.5 hours instead of the 3 hours it was supposed to be. But I was not mad about that at all and loved every second of it.

After the art tour, we were invited to participate with the hostel in their pub crawl. It was 12€ for 5 shots, 3 beers, and entrance into the main club on Pink Street. It was super fun and I got to meet a lot of new people from all over the world! We were out until about 4 am but I had fun so it was worth it to me!

On Sunday, we decided to venture to the Torre de Belem. However, we did not know it was going to take us three hours to get to it from what seemed to us to be the nearest metro stop. That’s right, we walked three hours to get to a monument. But it was along the river and it was GORGEOUS both weather wise, and view wise. We ended up eating lunch at a Moroccan restaurant under the 25 de Abril bridge because Zac wanted seafood. (Not sure why we picked a Moroccan restaurant, but regardless, the food was amazing and so was the view!) We continued out journey to the monument and eventually made it there just in time for it to rain and I was hood-less and umbrella-less. The rain didn’t hinder the beauty, though!

From the monuments, we went to the Pasteis de Belem, a famous bakery near the monument, for their pastries because we heard they were to die for. Long story short, they were. Little custard filled tarts that tasted so good with cinnamon and powdered sugar. I wish I could take some of them home with me as well but alas, I cannot. 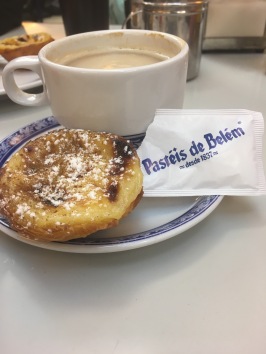 From the bakery, we made our way back to the train/bus station we arrived in and waited for our bus to take us back to Madrid. We went by bus both times and it was about 50€ roundtrip. Even though the bus took 8 hours each trip, I thought it was worth it because they were both overnight and we could sleep during the ride, it allowed us one more full day in Lisbon, and it was about half the price of a plane ticket.

Overall, I absolutely LOVED Sintra and Lisbon and I cannot wait to go back someday! The locals were very nice and it was a very clean city. And even though I don’t speak Portuguese, I could read most of it since it was similar to Spanish. And, most people there speak English, whereas in Spain, they do not hardly at all. I can’t wait to go back someday!