As most of you know, I am currently in Spain studying abroad. While it may only seem like I’m traveling around and having fun via all the pictures I’ve posted on my Facebook, I am “studying” also while I am here. I put studying in quotations because the classes that I am taking are not very difficult and are more psychological and I am learning things about myself rather than learning for knowledge that I may only use once or twice after the classes end because they don’t pertain to what I hope to do in the future.

My first class is quickly coming to an end and it surprises me to think “Wow. I have been here for three weeks.” The class is titled Creative Thinking For A Better World. In this class, we are challenged to push ourselves into thinking about different ways to problem solve. We have two main projects, a personal problem to solve, and a group project to solve. We were encouraged to keep a journal about cultural differences we noticed in Spain, and a couple of other things. If you are interested, you can find those here.

For my personal problem, I wanted to figure out how to become more independent. For anybody who knows me, I can be very dependent when it comes to certain things and I do not like to go places by myself. Most of you know that I almost didn’t go to Spain because I was essentially going alone since my best friend decided he was no longer going to go. But the more I thought about it and the more my friends, family, and professors encouraged me to go, I decided that this was something I wanted to do for myself, and that’s exactly what I am doing. If you would like to read a whole synopsis of my personal project, you can find that here with a PDF attached.

Anyway, here is what I actually wanted to write about. Becoming an independent person definitely isn’t easy and it takes time. There is so much more to it than what I first thought, which was to just force myself to go out on my own and do things so that I would become more comfortable with going and doing things by myself. However, through this whole problem solving process, I have learned that there is so much more that goes into becoming an independent person. One of those things is that independent people have certain personality characteristics. I wrote down eight of them for my assignment, and I have already noticed myself starting to exhibit some of them in my personal life. The different areas that I have noticed myself becoming more like an independent person are being confident, not being afraid to make mistakes, have personal hobbies, and being observant.

One of my favorite places to go in Alcalá is San Diego Coffee Corner.

I struggle with social anxiety and being afraid to say something to someone or to ask them a question, especially now when I have to speak in Spanish instead of English. The man that works at San Diego is named Sergio. He is very, very nice and easy to talk to. However, it took me a little bit to be able to talk to him because my social anxiety kicked in and I was nervous to have to use my intermediate-level Spanish with somebody other than my host family or when ordering something at a restaurant. He could tell that I was nervous and shy when he could see it on my face that I wanted to say something to him but I was afraid. He told me to not be shy and to be confident when I speak Spanish and to just speak it. Simple. Sure, I will make mistakes, but I will learn through those and he knows English so if I really couldn’t say what I wanted to say, he said to say it in English and he would help me translate it to Spanish so I could learn. Right there, Sergio helped me realize that if I am going to do this whole ‘becoming independent’ thing that I need to work on being confident and not be afraid of making mistakes.

I also did something bold last night (sorry, please excuse my nerdy CG humor). I had finished my homework, finished my show on Netflix, it was dark out and raining, and dinner was in a couple of hours. I had no idea what to do with myself, so I finally worked up the courage to ask my little host sisters if they could help me with my Spanish. They have a small play room next to my room upstairs and they have been playing school in there the last couple of days. I had thought about just asking them then if I could play so that I could work on my Spanish, but I got nervous and afraid they would think I was weird, so I didn’t.

“I wonder why we all fear the things that we might not know..” -Maybe IDK by Jon Bellion.

I don’t know why I get so afraid of such simple things such as asking eight-year-olds for help with a language that I am not completely fluent in but they are. The worst thing they could tell me is “no.” yet for some reason, I still am afraid of asking for help. I think part of it is because I am such a perfectionist and I like to do things on my own, so it is hard for me to ask for help. Especially when there is also a language barrier in the way. I know what I want to say, I just have a hard time being able to say it correctly with the different verb tenses that I kind of remember learning in high school, and some things have different words that mean the same thing and so it’s hard for me to decipher when and where to use which word..but I am learning. Slowly (which I learned is the word “lento” in Spanish) but surely.

I finally mustered up enough courage to ask them for help, and they were so excited. They started talking about 50 words per second (or so it seemed) and so I knew my first order of business needed to be how to ask them if they could speak slower. I had been thinking about how to say that for the past three weeks but I still had no idea how to phrase it. When I asked how to say the word ‘slow’ in Spanish, they didn’t understand what I was asking. I said it in English because they both know some English and I figured slow would be one of the vocabulary words they had learned, but I guess not. Therefore, we had to play charades but with words in order for me to get across what I wanted to know and for them to understand. I kept saying “cómo se dice ‘slow’?” and they didn’t understand..so I moved on to saying “como una tortuga. Una tortuga no es rápido, es ___” (like a turtle. A turtle is not fast, it is ___). Finally, they began to understand what I was asking and the word “lento” (slow) was added to my vocabulary.

After that, the older host sister asked me to come into her room to talk because she knew I was asking for help because that’s what the twins told her and they were unsure how to help me because I kept saying that I needed help and practice with my Spanish because sometimes it’s hard for me to say what I want to say. We ended up sitting on her bed and talking for about an hour just about different things because the only way to get practice, is to practice by doing it. We talked about a lot of different things, from if I had any siblings, if I had a dog (because one of the twins loves dogs), to what I was going to school for, to me hating blood, and mi novio (boyfriend). It was really nice and they were very patient with me and I was so so thankful that they were willing to give me a chance so that I could learn.

Now that it is over, I feel silly for being so afraid..but proud of myself for stepping out of
my comfort zone and for pushing myself. And for reaching out to them because I feel like I haven’t really bonded with any of them yet because of the language barrier and being afraid of saying things for fear that they will be wrong, like this joke that was presented to my Introduction To Spain class the other day, but that’s a whole different story for another time. Long story short, grammar matters.

As far as having personal hobbies goes, I have found myself having more and more free time as the excitement of being in the Madrid/Alcalá area has gone down a little bit and I’m not wanting to go explore every afternoon after class because I’ve either already seen it or I want to save something for later on in my time here. One thing I personally enjoy is graphic design and I’ve always had this desire to be good at drawing. I am a perfectionist, and I am afraid of failing or something not looking perfect, but I am working on being able to just draw and see how it turns out, which goes back to not being afraid to make mistakes. I hope to be able to improve my skills before I go back to my crazy hectic life back home.

I also have become more observant since coming to Spain. I notice cultural differences all the time and have become more humble and thankful for the things I have at home. One good example of this is the food difference. I love vegetables and I’m used to having them with every meal, but here they don’t seem to do that. At least, my host family does not eat many vegetables because my host sisters do not like them. I am very grateful whenever they make vegetables for me, because I know that they are making them just for me. I got very excited last night because there was corn in the pasta salad we had! There are too many cultural differences for me to mention all of them, but the food has been one of the major ones that I have noticed.

I am hoping to get better at not being so afraid of failing by the time I leave Spain, and 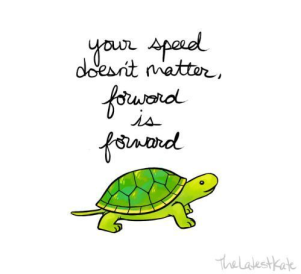 I am hoping to become more independent. I haven’t exactly gotten the whole “go somewhere by myself” thing down yet, because most things are enjoyed more when they are shared with someone else and this is such a new and different place, that I want to explore it with my friends so we can share the experience. I keep thinking about maybe hopping on a train and heading to Madrid to a coffee shop by myself, but I have yet to do so. Maybe I will later today, who knows! But for now, all I know is that I am seeing improvement, even if it is lento pero seguro (slowly but surely).

3 thoughts on “Slow and Steady Wins the Race”